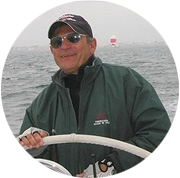 inventor of the Sock-Jib ® is related to sailing and regattas since 1957 and as a professional yacht from 1975.

His fondness for design and an experience of over 20 years and rollers furling sails always had the goal to design a wind sail and increasingly perfect curl. The idea of ​​being able to easily replace when rolling genoa lost its efficiency was also a project to which the holder now Banks Sails Spain dedicated years of testing. In the wake of the popularity of sleeves or socks to raise and lower genoas protect spinnakers or rolling, the idea of ​​a holster built into a candle was rounded up to materialize in the Sock-Jib ®. The design was so revolutionary and original that could materialize in a patent.