Advantages … but not at all

This demonstrated that for the cruising sailor weekend or even for more serious sailing across the ocean, furling sails are the best choice for its performance , comfort and safety.
Winding systems allow to reliably roll in genoas forestay around easily from the cockpit , with a single charge out .

An additional resource of the system is that as the wind increases you can roll the genoa adapting their surface wind intensity .

While new technologies have advanced design and materials to produce genoas who behave best when partially rolled – and getting better day by day – standard candles offer a poor performance , especially upwind .

We must also mention that at present many genoas genoas are not specially designed for conventional reel but are genoas that have been transformed to the system with varying degrees of success , depending on the case . 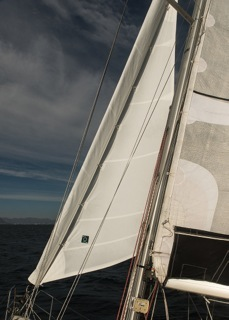 When the wind increased and the course to steer , the genoa partially wound or ” curly ” does not ensure adequate direction or speed , plus the real possibility of rifarla , fishing wisdom would suggest a change by a small jib or storm

On a sailboat with carabiners change maneuver for a genoa jib can be slow and laborious but in the short or the long run can be completed by a single crew , basically because when you release the halyard the sail can be lowered safely taken from forestay . On a sailboat with furling the maneuver requires several crew as the lower , load should watch the sail on deck quickly as this out of the headline , you can go to the water.

Haul , folding, bagging and keep rolling genoa and a jib or tormentin bend in the winding , is a hard task , sometimes impossible for a small crew cruise. Keep in mind that the furling sails should be embedded on a winding section aluminum which further complicated maneuver and forced to have a crew member guiding bow sailing in the headline while lifting .

An additional forestay with foresail is of carabiners or a second reel is of course a solution traditionally used on cruise ships , allows raising or unwind a headsail from the cockpit . But remember that the tormentin is scale have on the forestay and the staysail forestay on a more aft, so the effect of each navigation and sailing yacht balance is different. That is why the great ocean yachts estayes have two close together in the bow and a third more trinquetada forestay aft. Anyway these are exceptional yachts and not the common case of cruising yachts that need a simpler solution without complicated and expensive facilities . They also come to mind two extreme solutions , such as using a halyard and forestay and the sail of carabiners on it or have a headline tormentin with cable and try to give maximum tension. No basis , for any reason, your strategy with strong winds aforementioned techniques do not work.