EASY TO DO … hard to explain

SOCK-JIB ® is a small jib or storm jib hoist that can simply and quickly without lowering the rolling genoa. It has a built-in holster that lets envergarlo the genoa rolled over taking it with carabiners Wichard on himself. To hoist the genoa is piped into the case of SOCK-JIB ®, like a windsurfing sail or Laser makes with the stick.

Scale have the sleeve engaging the Wichard hooks “one hand” – THAT NEVER FAIL-around genoa rolled. Take the halyard (which may be the spinnaker or genoa second) makes firm the bow with strobe (is a simple place with a carabiner) to the bow of SOCK-JIB ® be located above the furling drum, put the sheets and return to the safety of the cockpit and hoist the sail. 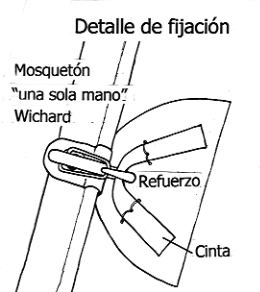 Any boat, any reel, any crew, including solo. It has no limitation, closures or complicated elements.

No need for alternative or modifications forestay rigging or installation previa.Imprescindible aboard any cruising yacht with furling genoa. Perhaps and forgive the comparison, would you vacation the car without a spare tire?

When this lifting prevents the problem of a danger in accidental unwound half a gale.

In yachts SAILING with Tuff luff (double plastic lacing) is very useful because in case of breakage the SOCK-JIB ® can hoist same. The measurement formulas require offshore yachts envergue system tormentines alternative for the possibility of failure or inability of the double headline envergue. 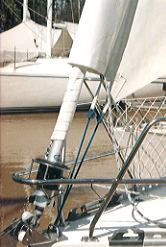 Although envergue facility, is the fundamental characteristic of SOCK-JIB ® its performance, especially upwind, is remarkable. This has been proven by hundreds of experiences windy reports boaters, even with success in racing.

This is perhaps the most important advantage compared to the poor outcome of standard rolling genoas partially rolled. (fist high – very baggy – unsuitable for windy fabric).

“… At present, most cruising sailboats have genoas rolling. Crosses ocean in the last thing they should do is lower their rolling genoa in the middle of a storm to hoist a storm, it is dangerous in the extreme .’s why the ocean other inner forestay is best. for weekend sailing and cruises, the SOCK-JIB ® designed and patented by Juan José Merayo is a solution. himself luff of SOCK-JIB ® wraps genoa rolled up and taken with opposite carabiners on itself. Easily can hoist the storm jib on the genoa rolled … ”