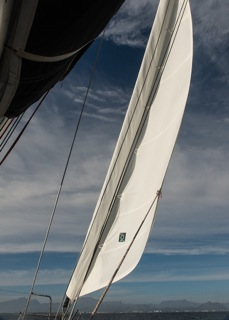 1) Has difficulty climbing over the genoa ? Because in principle NOT cover this comfortably sized Dacron and Dacron on skates very well. In addition to induce and to minimize the possibility that locks in the clew and the sheets , the Sock- Jib ® is a device that stiffens the mouth easier lifting.

2) where are the sheets of genoa ? The sheets MUST be left on, as they ensure that the genoa desenrolle.Si not possible must be some extra laps after the reel so that the sheets are wound on the genoa and go under cover . Other sheets should be used for the Sock- Jib ®

3 ) The cover does not offer a large surface to the wind hurting performance too ? ‘s Sleeve SOCK – JIB ® forms a AERODYNAMIC PROFILE amazing , much better than the one genoa partially wound . In navigations test , when comparing identical yachts with Sock- Jib ® and storm we could not observe differences in the rate or luff angle , even in high winds.

4) The luff tension can be a problem ? Quite the contrary . The Sock- Jib ® needs less power than a conventional sail as the case is supported by the candle enrolladaPor rifaduras the same reason they are not a problem (we had not a single report on rifaduras ) or on the web or in the carabiners. Breaks usually occur where there is great pressure on a small surface , not when is distributed over a large area as in the case of Sock- Jib ®

5) that has surface ? The Sock- Jib ® is a system with which we can design a jib or TORMENTIN to be hoisted on rolling genoa . Our experience of years and thousands of miles sailed with Sock- Jib ® TORMENTIN indicate that the most appropriate is sailing to the system.

We can design and manufacture sails according to special characteristics of a yacht or navigation type to do , where they are needed.

If you must always have a winder Sock-Jib ® on board.